Focus is our most popular category and, coupled with our Brain Boost category, repesents almost half of all music listened to on Brain Shift Radio.

We began working on focus and attention in the early 1990's with several studies on Attention Deficit Disorder in both children and adults.

Brain Shift Radio is designed for immediate episodic results. It is simple to use and exceptionally inexpensive. And because BSR customizes the stimulation based on your needs and feedback, we can offer some great focusing effects, regardless of how well you focus to begin with.

To obtain results for improving your focus simply create an account, choose the Focus category, and answer the intensity question. 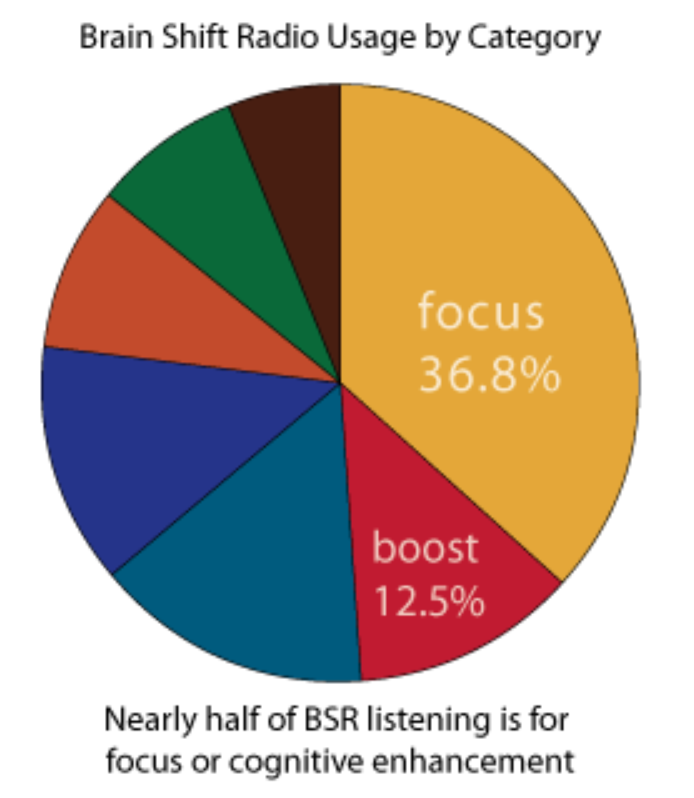 Aside from using our CPT data to increase user focus, these tests also encourage engagement, an important component in achieving sustained use and improved gains. 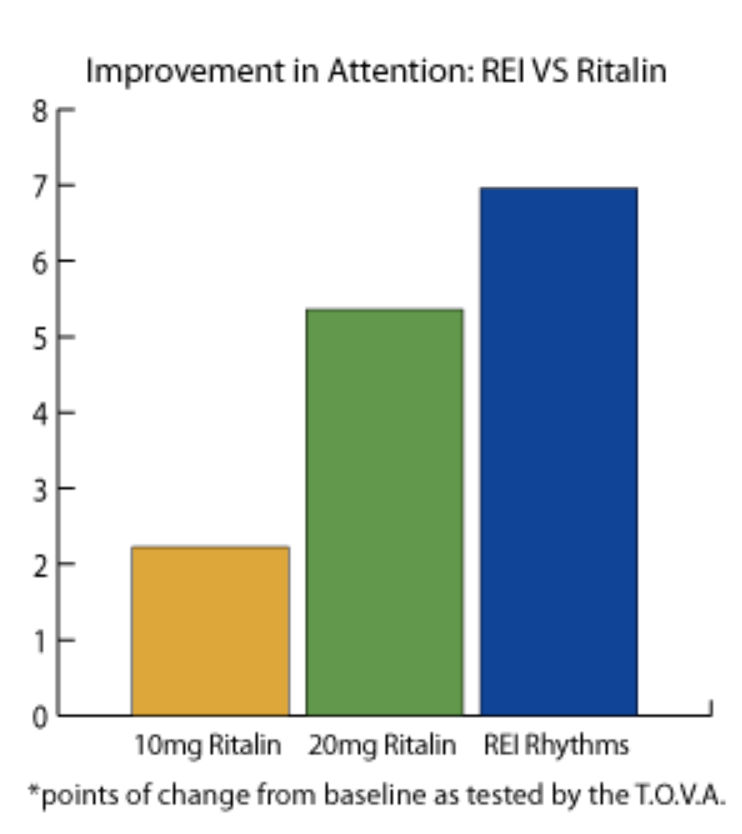 The subject's baseline score was -12.74, putting him squarely in the AD/HD camp (anything below a score of 0.00 suggests attention problems).

His score with 10mg of Ritalin was a slightly improved -6.60 while his 20mg Ritalin score showed a significant improvement with a score of -3.47.

His score when listening to the REI focusing music, the same tracks you will find in the Focus category of Brain Shift Radio, were a near normal score of -1.87.

This improvement was nearly 50% greater than the better of the Ritalin scores.

These results suggest that REI offers a strong alternative to Ritalin (and other stimulant medications used for ADD).

The advantages of BSR music include an absence of side-effects, individual customization to achieve the optimal stimulation level for each person, and improved sustained attention.

This study (2) examined 100 elementary-aged children in a double-blind, placebo-controlled format. Students performed four separate CPTs (Continuous Performance Tests), consisting of two tests with no music and two tests with either a placebo music recording or REI music tracks. Children were randomly assigned to the placebo or REI test group.

The results showed a significant improvement in attention for those who listened to the REI recording over both the silence and placebo conditions.  The silence group produced an average score of 23, the placebo group scored at 31, and the REI Rhythm group scored an average of 68.

These results have been encouraging enough that Brain Shift Radio has invested tremendous time and energy developing a next-level study to further explore the efficacy of REI rhythms and the delivery of BSR music.

With our new Continuous Performance Test we are moving music research forward by conducting the largest study ever done on music for focusing.

Our attention tests were built using standardized, quantitative testing methods on an expanding platform which will allow us to collect and analyze limitless data with a goal of using this data to not only determine whether music can improve focused attention but also which techniques offer the most significant results for each population group.

Thousands of Tests = Some amazing results

Since we launched the BSR CPT initiative thousand of people have taken the test. The results we've seen are 3.6 times better than the most popular study on music for cognition (and the number of people who have taken our test is hundreds of times more than this study) (3).

As an overview, the average error-rate reduction was 36.73% with improvements falling fairly consistently across the three error types.

These are significant numbers and suggests that listening to Brain Shift Radio when you need to focus may help you sustain your attention.

We saw reductions in all three error rates – detection, commission and omission – with the BSR music (stimulated) condition compared to the silence (control) condition.

Commission errors (Comm): The silence (control) condition error rate was .73. The BSR music (stimulated) condition showed an error rate of .39. This is a .34 or 46.5% reduction of errors. 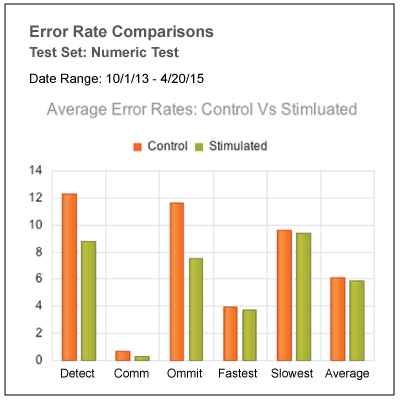 Fastest click: For the silence (control) condition the fastest click speed was 383 ms. The BSR music (stimulated) condition showed an average click speed of 355 ms (milliseconds). This is a 28 ms or 7.3% slower click-time.

The framework we built for Brain Shift Radio was designed to allow researchers to explore the effects of music on attention with ever-expanding and filtered datasets with any music. Researchers can compare BSR music to silence. Mozart to silence, Mozart to BSR, BAR to heavy metal, and so on. All the while we're capturing data about gender, age, perceived focusing abilties. And we're able to compare repeat user's results over time.

All this data not only hleps us understand the ability for music to improve attention but also helps us improve our music to deliver even better results.

Researchers: Contact us about using our CPT infrastructure for you studies.

Note: Data used for these studies will be anonymous and will comply with IRB and HIPAA requirements for client privacy and research integrity.